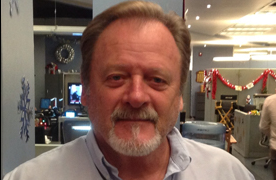 Scott Young’s unique career path started with a brief three-year stint in the biz in 1971. A succession of strikes and slowdowns, and the fact that he had a young family to support, led him to leave. He spent 20 years in land development, specializing in recreational properties and golf courses. In 1991, he found retirement unrewarding, and slowly worked his way back through non-union and permit work. Television allowed him to work in town. For the last decade he’s been on Major Crimes, which was previously called The Closer. The series, currently the number one scripted show on cable, was just picked up for season eleven.

asked Scott how he keeps it fresh when working on the same show for so long. He says that change is constant. After season four, the sets were completely rebuilt. In season six, Mary McDonnell joined the cast, and after the seventh, Kyra Sedgwick left the show. And the technology is always changing. “You always have to think outside the box a little bit, and make your shots interest ing,” he says. “I try to paint with light. Once I have my actors lit, then I think about my background. That is equally important because it’s going to capture the interest of people.”

The job calls for constant adaptation, and that also helps keep things from becoming mundane, he says. “I think the biggest challenge for gaffers today is adapting,” he

He scoffs at the notion, heard regularly at the dawn of the digital age, that lighting would no longer be required, or would be less important. “I have found the opposite to be true,” says Scott. “I don’t need as big a light, but need the same number of lights to create a movie that is interesting. You have to light your background, make your foreground interesting, and make points of interest. I use light to create a realism that people can look at, that is visually pleasing.”

An episode is usually done in 72 days, with two days out on locations. That also Creates new challenges. Scott says the switch to alternating DPs, which happened during season six, was the biggest change. Currently, the show is photographed by Kenneth Zunder, ASC and David Harp. Brian Reynolds shot about 50 episodes in its earlier incarnation. A group of about ten directors rotates through during the season.