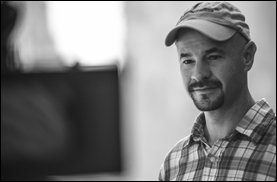 The Pace of change Accelerates

Cory recently decided to make the leap to director of photography, so it’s a perfect time to ask him to reflect on the last 20 years of filmmaking from the gaffer’s perspective. He says that the biggest difference is the pace of change itself.

“Technology changes the business, and that has always been true,” says Cory. “But when you look at the grand scheme, motion picture technology didn’t change all that fast until recently. Film remained essentially the same for 100 years. Suddenly, digital arrived- after years of promises – and now you’re getting a new chip or sensor all the time. New Players are jumping into the market, like Black magic and Canon.

“Because we’ve made the leap away from film- for better or worse – these companies are striving to come up to film’s standard,” he says. “That has to keep happening, and it’s one driver of the change

The sensitivity is there. Now it’s a matter of the dynamic range, and the ability to handle contrast with an organic quality. The high end is where digital peaks out. It doesn’t have that same natural quality in the falloff. That’s where digital looks digital.”

Cory says that there’s been a parallel acceleration of the pace of change in the lighting world. In the old days, the knowledge that a gaffer gained at the beginning of his or her career would be more or less applicable at the end. I asked Cory if that’s changing now – is keeping up with new equipment a growing part of the job description?

“In the lighting world, we’re dealing with color temperature in a different ways, with different tools mostly LEDs,” he says. “Back then, you had tungsten, and for the longest time, you had only arcs and dichroic. When HMls came in, that was something new to learn. KinoFlos. I remember doing a job with a gaffer who had worked for ten years on a sitcom at a major studio. He said, Those are kind of cool. What are they all about?” KinoFlos had been out about eight years at that point, but he had never See One. “So there were new technologies, but they came in smaller steps,” says Cory. “There are the new fixtures from ARRI, and all these little LEDS, panel lights and plasma lights. Cinematographers depend on gaffers to keep them abreast of the tools that are available, too, and finding the right solution for a certain task or situation. And people are out there shooting with new cameras at 3200 ASA. That changes the whole game.”

The impact is felt even on the scout, he says, where gaffers are thinking less about adding light and more about where to take it away. That leads to a greater reliance on grips and their work

The gaffer’s job description has also changed in other ways from the golden era of studio filmmaking. Lighting companies now regularly work very closely with top gaffers in developing new tools. In the old studio system, you started out as an apprentice, became an electrician, worked on the rigging crew, and then made the shooting crew, and fall went well, best boy. With luck, you might make gaffer at age 50

Today it’s different. Cory, for example, met Wally Pfister through mutual friends while working at Roger Corman’s, a place where “you could make mistakes, learn on the job and still eek out a living, he says

Within two or three projects of starting in production, Cory was gaffing. That’s something that didn’t happen in the old days, and it’s true in other facets of the industry as well. Slowly the projects became bigger, and now they are the biggest-sometimes Cory’s lighting budget exceeds $10 million. In situations like that, the gaffer’s role can take on more of a logistical flavor. Management skills play an ever-more crucial role

“You’re a department head, and a manager to some degree,” Cory says. “You’re managing people who are working for you, while also having to be responsible to the producers and the DP and the director. You’re there to facilitate and get them what they want, but in a way that is as efficient and economical as possible. And on the bigger budgets, the stakes definitely rise. Politics are certainly involved. It’s not a normal working environment.”

it often comes down to equipment versus time, and the gaffer’s skill at balancing those resources can be invaluable. “Sometimes, it’s cheaper to rent more equipment, spread it out, and not have to move it all while you’re shooting,” says Cory. “It’s expensive up front to rent the gear, but in the end it saves you money because you’re shaving of time in the day. On a movie where a day of production costs half a million dollars and up, if you save an hour, that’s $50,000. Of course, if you end up waiting for other reasons, then the money wasn’t worth spending. That’s where experience comes in trying to balance all of those elements.”

We wish Cory well in his new endeavors, and we look forward to seeing the visions he creates from his new position behind the camera