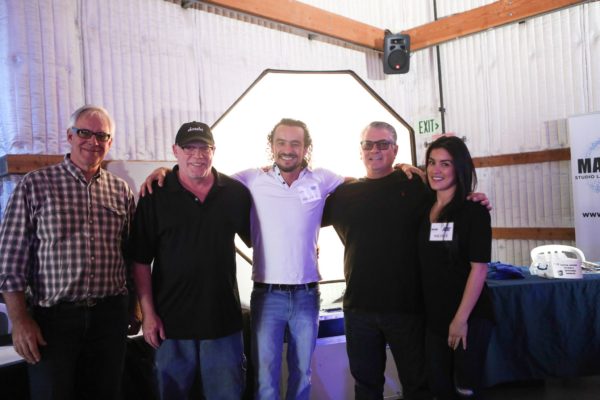 Dwight D. Campbell’s career as a lighting pro stretches back more than three decades. Along the way, he’s worked with ASC luminaries like Russell Carpenter, Dean Semler and Julio Macat. With Mikael Salomon, ASC, he worked on Backdraft, Far and Away, The Abyss and Torch Song Trilogy – just a few of the more than 80 credits he’s earned. Dwight agreed to share some of the wisdom he’s gained during that impressive run with The Gold Room.

Dwight grew up in Michigan and majored in film, business and the humanities at the University of Michigan. His career began on documentaries for the National Endowment for the Humanities. Then came graduate school in the producing program at AFI, where he monitored the camera program simultaneously. He feature career began to gain steam while he was also working as an art director for a magazine.

In 1983, after a long stint lighting motion control and title work with DP Tim Angulo, Dwight gaffed El Norte, a film shot by James Glennon, ASC. Runaway Train came next, followed by Tales of Meeting and Parting. All three were Oscar-nominated in various categories. He joined the union on The Abyss.

Dwight makes a distinction between the very high quality of today’s best television cinematography and the overall mediocrity of the medium’s imagery.

“Some of it is incredible,” he says. “But how many shows overall actually have artistic merit? Not very many. In the reality TV world, is it artistic? I come from the film world, and I still love shooting film the best. I think if you can shoot on film and post in digital, you get the best of both worlds. It’s nice not to have wires going from the camera to someone else who is going to evaluate the picture. And the time it takes to set up the monitors can slow things down and keep you from moving forward. It can be simpler, or it can be difficult.”

Lately, between feature assignments, Dwight has been consulting for Disney on animated content. He’s contributed expertise to Robot Chicken, SuperMansion and Buddy Thunderstruck, and many others.

At Stoopid Buddy Stoodios in Burbank, there can be as many as 26 stages shooting five days – and nights – a week to meet deadlines.

“We’ve had probably about 450 light fixtures burning ten to twelve hours a day, five days a week,” says Dwight. “It’s not uncommon to have 20 to 30 lights lighting a 4X4-foot table. You can be quite specific. Sometimes, you get away with a lot of reflectors and cards and things that allow you to get a special look, but other times it’s just a lot of little focal spots. Sometimes it’s just a real simple – a broad source for a comedy scene. But you have to work hard at it to make it look realistic. It’s a lot of tight spaces.”

MICROgrip equipment, a small gobo system made by Matthews, makes a big difference in tabletop photography. The lamps are often 300- or 650-watt Fresnels, with occasional 1Ks and 2Ks. Mini Source Fours are another go-to fixture. Mole Focal Spots are sometimes brought in.

Dwight also relishes the opportunity to work on in various formats. Around the turn of the millennium, he worked on Cirque du Soleil: Journey of Man with cinematographers Reed Smoot, ASC and Peter Anderson, ASC. The format was 3D IMAX – on film.

“3D doesn’t really change my job – it just amplifies it,” he says. “You have to have the depth of field to create the illusion and make it work. 3D doesn’t work unless you have it in focus and you don’t break the borders. It’s a challenge to have a 5/6.8 split. Even on the fast film stock, at 500 ASA, that was a stop and two-thirds to two stops of light loss just because of the rig.

“It’s gotten easier,” he says. “By the time I went onto Avatar, it was all digital. You have more depth of field because of the smaller sensor, and that means you can hold the illusion of 3D at a lower stop. You can immediately play it back, and see if it works.”

He sees the advent of lighting to the monitor as having a detrimental effect on the on-set hierarchy, and through that, on the quality of imagery produced.

“It used to be pretty straightforward,” he says. “We’d do our job and we’d see dailies and we’d know where we were going. Now, people want to look at a monitor, decide what’s there, make changes on the fly, and expect it to be perfect. It’s an irritating experience.

“If a cameraman can’t visualize what he or she wants to shoot, and is dependent on the monitor, I feel that he or she has missed the first step of doing the job,” he says. “You need to be able to use your eyes. Look at all the complexities that were encountered in the 1930s and ‘40s – black and white film, re-exposing, et cetera. It’s very different from what we do in terms of the planning required.

“In today’s world, anyone can go out and become a 5D DP,” he says. “You can walk outside and shoot people walking down the sidewalk and it’s going to look beautiful. But is that what you’re supposed to do when you’re telling a dramatic story? You’re trying to create the mood, and tie it all together, and have the full impact of what filmmaking is capable of. You always need the foundation of basic camera skill to do the job right.”

Dwight’s most recent assignment was Love by the 10th Date, a romantic comedy for Lifetime. The director of photography was Byron Shah. It’s safe to assume the project’s visuals are based on a solid foundation of basic camera skill.

“That was a good experience,” he says. “They say it looks fabulous.”