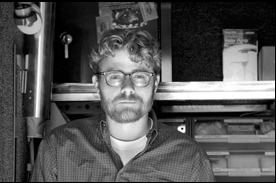 I reached Erik Messerschmidt in New Orleans, where he is working with cinematographer Matthew Jensen, ASC on The Fantastic Four. The project is their first collaboration. Prep began in February and shooting started in May. I asked Erik about working with a DP for the first time on a complex and expensive project, in an incentive state.

“I like to approach the job as if I’m the cinematographer’s caddy,” he says. “I like to play golf and it’s similar in some ways. You’re working with the person. You get to know him or her, and to understand their needs, which are always different. It’s a relationship that is incredibly personal and unique in each case.” Sometimes, the cinematographer wants a high degree of creative involvement. “Some people want you involved aesthetically, in how the movie looks and feels,” Erik says. “They want to you be familiar with their visual references. Others need help logistically or with the technology. Part of the job is to find that out. I’m just there to support in any way can.” Depending on the job, lighting is sometimes subordinate to other aspects of the gaffer’s role. “Especially on a big movie like this – a larger, more logistically involved movie – my job becomes more political, with a lot of air traffic control, with very little about which flag goes where or which diffusion or color we used. The lighting techniques that we use are all decided well in advance. “It’s very project- and personality-specific,” he says. “Your comfort level with that particular cinematographer contributes to the ease with which it’s accomplished. It’s a partnership. I think it’s very similar to any sort of business that requires a very tight collaboration.

And of course, the key grip is part of that as well. On this particular project, the DP that I’m

working with is very close with his key grip. He’s been with him a long time – much longer than have been. And so, he’s in a creative and organizationally supportive role as well.” “Ken and David are both brilliant, and I love working with them,” he says. “They each have their own ideas, and I’ve learned a lot from both. But you shift gears every episode. They do have slightly different lighting styles, and you adapt to each new theme. And it’s not about so much how I want to light a set, it’s how do light the set the way that pleases them and still have my input and my signature on it? Sometimes it’s a challenge, but it’s always a lot of fun.”