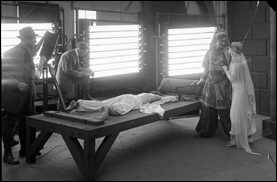 he Roots of the Fluorescent illumination

Frieder Hochheim is a former gaffer who is well-known to lighting professionals. According to legend, his company Kino Flo, was born in 1987 on the set of Barfly, where DP Robby Miller couldn’t fit traditional lights into the cramped locations. Frieder and best boy Gary Swink designed a high output, no-flicker fluorescent fixture with a high-frequency remote ballast. The lamp had fewer spectrum anomalies than standard fluorescents and could be taped to the wall. Soon these lamps were adopted on film sets, and the rest is cinematography history.

A while back overheard Frieder talking about the roots of fluorescent technology at the ASC Clubhouse. Later asked him to elaborate “At the turn of the last century, motion imaging technology was an emerging technology,” he says. “You had film speeds of ASA5, and film was orthochro-matic. Today, we can’t even Wrap our heads around that. That’s why the early stages could be oriented to track the sun. But in the studio? The carbon arc was available, but they were open-faced, spewing smoke and used close to the actor, making it difficult to act naturally while fighting the burning in their eyes. When first came to Hollywood, I was working at Essanay Studio, up in the perms. You could still see the glass ceiling, and in the corners where you didn’t go very often, there were still inches of carbon dust. When you came down from up there you were just black, like a chimney sweep.”

In order to learn about how carbon-arc technology was adapted for the application, Frieder found a book from 1927 titled “Motion Picture Production.” In a photograph taken at Metro Studios, he could swear he saw a slew of Image 80s hanging. They turned out to be Cooper Hewitt banks.

“Peter Cooper Hewitt was the inventor of the first mercury-discharge lamp,” he says. “This was a glass tube, maybe an inch and a half in diameter, with a ball of mercury at one end. You’d connect it to electricity, and ignite it by tilting it so the mercury would flow to the other end. As you pulled away, you’d pull a plasma stream down which gave of a blue-green light. That worked well with blue-green sensitive film. The combination worked and it was bright as hell.”

There were no precautions taken for UV light. There might be hundreds of such lamps on a single set. Make-up had to be adapted for the blue-green cast A visitor to the set might think he or she had landed on the wrong planet.

“Little or none of this equipment survived,” says Frieder. “I did manage to find a photographic version of the Cooper Hewitt in a Philadelphia antique shop It is something to behold. It’s totally bizarre. And you still might need a 30-second exposure to get an image on a glass plate.”

Frieder says that in the late 1920s, phosphor was added to the inside of the tube, reducing the amount of mercury necessary. From that came, eventually the familiar fluorescent tube, which was commercialized in the 1950s.

“In the 1980s, the technology was re-adapted for motion picture,” he says. “That’s how long it took – many years. If you compare that to the introduction of the LED, and the length of time to its acceptance in motion picture industry, that timeframe now is dramatically condensed. Sohistorically, things have ramped up fast. We’re now in an electronic world. It’s solid state lighting and were following the business models in which computers are changing every thing. An LED product introduced two years ago may follow the rental model of electronic cinema cameras – in four years’ time clients will demand the newest models and older ones will languish on the shelf. It’s a very exciting time in our industry-perhaps the most dynamic since it was invented- but from a rental perspective, it’s chaos out there right now.”

Frieder says he is expecting a gradual decline in the market for fluorescents as LEDs improve in design and spectral quality. Not every production can afford LEDs. But the versatility of the latest lamps is astonishing. In early 2016, Kino Flo introduced the Select 30, an LED fixture that is wirelessly controlled, Kelvin variable between 2700 and 6500 degrees, with green-magenta attenuation. He says it’s essentially a mini-computer. And he promises that won’t burn the actors’ eyes, and in 100 years, no lighting pro will be covered in carbon dust as a result of its use. Progress