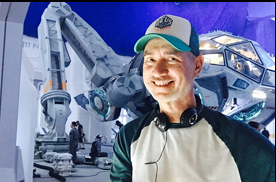 Color Timing Through the Light Board on Independence Day: Resurgence

Jay Kemp has learned a thing or two in his 25+ years in the lighting business. His credits as a gaffer or rigging gaffer include Captain Philips, Lincoln, Cowboys & Aliens, and The New World, which means he has collaborated the likes of Barry Ackroyd, BSC; Janusz Kaminski; Matthew Libaticue, ASC; and Emmanuel Lubezki, ASC, AMC.

caught up with Jay just after Independence Day: Resurgence had hit theaters, where it would eventually bring in close to $400 million. On that massive project, he had worked closely with director of photography Markus Foederer, making extensive use of LED sources. The majority of the job fell into two categories: large scale blue screen “exteriors,” and very confined interiors. The prep time was brief

“The ‘exteriors’ usually required sky blues overhead, and the walls were interchangeable between dig blues, sky blues, and solids,” says Jay. With the exception of some selective hung mover placements, we avoided hanging anything over our stage ‘exteriors.” Markus was very particular about having very pure reflections on our subjects and was concerned that hanging fixtures would lead to unnatural speculars or shadows that would stand out against the soft blues.”

As a result, Jay Says, the plan was to defy convention, creating exposure for backdrops and room ambience with bounces from the floor into the sky blue overheads. “With the exception of a few hung moving lights where we couldn’t get access with condor or floor mounted fixtures, we would shape scenes almost exclusively with LEDs from the floor, on stands, or from a variety of lift configurations,” says Jay

For the interiors, the filmmakers relied extensively on customized installations of mostly RGBW LED ribbon. “It was important that we could make each space unique with the integrated fixtures, as well as utilizing them as the foundation for lighting the scenes themselves,” says Jay. “Our very talented fixtures foreman, Phil Abeyta, had intensive collaboration with the art department to establish the desired look and graphic qualities, while maintaining the placement of these fixtures for scene-specific illumination. The RGB Ribbon/Litegear controllers allowed for endless possibilities in terms of color, output, and effects. We would augment scenes mostly from the floor, and with the occasional non-ribbon-based overhead installation

Jay says that Foederer wanted to define a basie koolkit and stiek to tas much as possible. They tested a wide range of lighting tools, many of them unfamiliar. It was predetermined that they would use strictly LED and HM technology, with the exception of some KinoFlo units and practicals in a few sets.

“We began to narrow down the field based on tests that exposed each product’s photometric and spectral properties, as well as ergonomic qualities,” says Jay. “Markus was very quick to point out the rigorous performance pace we were about o undergo under Roland’s leadership, so user-friendliness was of paramount importance. We decided that we’d use HMls for our bounces into stage ceilings, specifically choosing Ari M class products for their

superior performance, as well as their relative portability. The HMIs, often with various degrees of CTB added, provided the needed blue screen exposure, as well as a cool ambience to enhance the scenes. Markus preferred that the shadow information render on the cool side, so incidental blue return from blue scenes was embraced to a degree.

“In fact, as HMls were bounced mostly from behind the scenes, we’d supplement with Creamsource Skys bounced from the floor on the camera side at 10,000 degrees Kelvin for our hyper-blue fill,” says Jay. “Knowing that our tweaking time would be very limited, we went through each of the chosen LED and moving light products with a spectrometer to determine DMX values for a basic gamut of Kelvin values, plus a variety of custom-picked colors mostly for interactive uses so that we would eliminate metering on the fly, and make quick judgements and modifications from the monitors.” This became especially crucial when it came to sequences that involved interactive lighting “Though were into these situations with strong plan, Roland, being the highly visual director that he is, would get very involved, thereby throwing out very challenging audibles, says Jay. “Programmer Kevin Hogan shares MVP honors with Phil Abeyta. Reacting to Roland’s requests during these interactive bits would’ve been painful, and possibly undoable, without the complete control that is afforded to us via ethernet, RGB, CYM Color Mixing. Also, using wireless technology as much as possible gave us freedom of movement that our pace dictated.”

Creamsource Sky became a workhorse. “In that they are designed mostly to function as a spacelight, they were cumbersome as stand-mounted units,” says Jay. “Their usefulness, however, kept them in the quiver. As mentioned before, we’d bounce them into stage ceilings, from stands, for cool, camera side fill. We’d also use them as direct sources to fill larger areas of blue screen, again from the floor. They were “go-to fixtures for interactive work mostly to simulate explosions.”

Foederer says the look is very dark and contrasty. “That was the first time it almost entirely with LEDs, aside from the blue screens,” says the cinematographer. “A few weeks after we finished independence day: Resurgence, shot a big set for Area 51 where we used 100% LED- miles of LED ribbon, with a big custom softlight. We don’t do any dailies color because like to have control over it. The way see it on the set, I want to keep it that way for editorial, until the final DI. So we color time through our LEDs, which is awesome. Everything goes through the dimmer board. There were a lot of scenes with a strong fluorescent or modern LED look, which is very green. We can basically do color on set through the light board. It’s so precise millions of color in fine increments, and you don’t have to change gels.”

Since Independence Day: Resurgence, Jay has gone on to two very different projects: Hostiles, shot by Masanobu takayangi, and Love Sonia, with Lucas Bielan at the camera. Hopefully he can share more of his wisdom with The Gold Room in the future