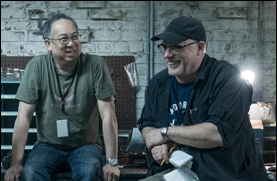 Jim Grce’s credits stretch back to 1980, and the list of cinematographers he has served is impressive, including Jost Vacano, ASC, BVK; Robby Muller, BWK; Dante Spinotti, ASC, AIC and Roger Deakins, ASC, BSC. He also worked with Ueli Steiger, ASC on a dozen features. I spoke to him during a break in the action on Batman v Superman: Dawn of Justice, a secrecy-shrouded project being shot by Larry Fong and directed by Zack Snyder.

asked Jim about the pressure of working with huge budgets and sprawling sets. “I look at it as merely reacting to the script and the parameters,” he says. “If the director and the producers approve a script, we comeback to them and let them know what it’s going to take to accomplish it. We might have some suggestions as to how to make it with less time, or for less money, but as far as the pressure of the money goes, we are a reactive department. We give them what they ask for.”

I asked for an example, an Jim thought back to Starship Troopers, the 1997 Paul Verhoeven feature, shot by Vacano, in which futuristic battles were fought against giant alien bugs. “We had a huge night battle scene in Wyoming,” Jim recalls. “We gave them the number for how many generators and lights we’d need, and how many miles of cable. If you want to see the mountains at night, this is what it takes. If you want to save money-make it a day scene. People fight during the day. And that’s essentially what

We did.” Jim’s career path began in sixth grade, when a teacher showed him how to shoot and

process photographs. Eventually he went to UCLA in the film department, starting out on Roger Corman films as an electrician on low budget horror films.

“We were just making 18-day wonders,” he says. “We allowed movies. We all did Whatever needed doing We didn’t get paid that much, but it was a lot of fun. So many good filmmakers came out of Corman- Coppola, Scorsese, Paul Bartel. Today, you can pick up your iPhone and make a movie. But we had camaraderie with a whole group of people, and we were all growing up together.”

One of his first assignments as a gaffer was on the Los Angeles portions of Sid & Nancy, shot by Roger Deakins. A year later, he was an electrician on Barfly with Robby Muller.

“I learned a lot from Robby,” says Grce. “I was interesting in cinematographer, and during Repo Man, we would watch dailies together. He said that he never knew how it was going to look until he saw dailies. The gaffer would light, and then Robby and would tweak it. He’d say “Alright, look at this hallway. It looks beautiful. Gorgeous. Now we have to destroy it.” He would destroy the beauty, and then it would look real.

“That was all the nonunion, Corman stuff,” Jim recalls. “We got a lot of these great Europeans coming over. I was a big fan of European films, and knew who those guys were. I worked a few days on Beastmaster for John Alcott, who made films with Stanley Kubrick. Where else could you get an education like that? We were working with filmmakers who wanted to make a movie and say something, and that was the best thing in the world.

“I got into film because I wanted to make something look like a Caravaggio painting or a great photograph,” he says. “Something that also depicts real and natural life. With those guys, we were learning to take into consideration what the scene was about. We learned to look at it like the director, to be there for the director. You have to be apart of it. You can’t just be silent and do your thing.”

Fast-forward to today, and Batman v Superman: Dawn of Justice. I asked Jim if the fundamental lessons he learned early in his career still apply, notwithstanding the new tools and techniques that have been developed in the interim. Of course, the answer was yes.

“Definitely,” he says. “We have all this technology available to us. I could put in a bunch of moving lights and do all these programmed effects. And that technology is great, and we need it. It might be a balloon that allows us to shoot inside a historic building without damaging it. But you don’t have to rely on it. Sometimes what’s best is the old-fashioned way to get a Tweenie, put some half-orange gel on and dim it down.”

LED lighting has been a game-changer. On Batman v Superman: Dawn of Justice, Jim and his team made some LED fixtures that are battery operated. “We can walk around with them, or install them without cables,” he says. “It does what we need it to do, and it looks good. They won’t burn up the location. We need to be quick. I’m not inventing the wheel here – a lot of people are doing similar things. But having a light where we can control the color temperature by one degree of Kelvin to match what’s there, and run it on a 9W battery – that’s something we’ve been looking for for 30 years.”

Batman v Superman: Dawn of Justice was scheduled to run for 130 shoot days. When I said goodbye to Jim, he was packing to head to New Mexico on that project. as to move in and do a close-up on the actor, something that showed the explosion even though we’d already blown up the car.”

The solution was an 18K in the distance, and on the actor, Lightning Strikes gelled with deep yellow and red and augmented with flame bars. “It’s not something you’d typically do- to put a Lightning Strikes in front of an actor,” says Scott. “But that’s what we needed. It was back far enough away where it wasn’t overpowering the eyes but still it the background with an explosion effect. It turned out well.”

The secret to such a long run is a good production company, Scott says. “I’ve worked on sets that were just miserable,” he says. “This company is fabulous. I’ve got virtually the same crew I’ve had for ten years. Keeping a crew together can be difficult because people get bored and they want to move on. These guys all have fun and we all love working together. The entire production itself has almost no turnover since the very first episode of The Closer, from the executive producer all the way down to people that sweep the floors at night. That says a lot.”