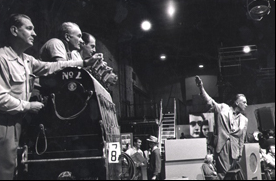 “Gentleman Jim” Plannette is a legend in the world of gaffers. He’s been at it for more than 40 years, with credits like Young Frankenstein, Legends of the Fall, E.T.: The Extra Terrestrial, Braveheart, Ocean’s Eleven and The Fisher King to his name. His resume lists more than 85 films. Jim brings a strong sense of cinematic history to his work, and a unique perspective as the son of a well-known gaffer, Homer Plannette, who started in 1919 – the same year the ASC was founded- and worked with many revered cinematographers from the silent era up through the 1960s. The elder Plannette’s credits include it’s a Wonderful Life and High Noon.

asked Jim about his earliest memories of movie sets. “I remember visiting the studio as a kid and seeing all the greenbeds with lights on them,” he says. “I vividly remember asking my father how in the world he knew where to put all the lights. He said, “Well, you have to start being aware of light, seeing light and seeing what it does, and then when you go to recreate it, you have a vision in your head to follow,” and that is absolutely the best advice I’ve ever had.”

There was a roughly three-year period in which father and son were both working.” I didn’t work with him very much, but the times I did were really wonderful,” says Jim. ” really learned a lot from the gaffers and cameramen I started out with. I became a gaffer pretty quickly, but I worked with some really good cinematographers in the beginning, including Vilmos Zsigmond, Laszlo Kovacs and John Alonzo. But in Spite of the many shows I’ve worked on, on every movieT come up against something that haven’t done before and have to figure out. If I didn’t, I think I would retire. If you’re doing the same thing over and over, it’s not any fun. New challenges – that’s where the fun is.”

asked Jim how things have changed in the gaffer’s world over the course of his career and his reply was, “Not much-nothing really changes but the technology. It’s like there are no new ideas. We just use different tools. My father told me stories about the Cooper-Hewitt bank, which was used in a similar way that we use space lights. It was an arc light that was so heavy that you had to pull it up with a chain fall. The riggers would stand on top of it and pull themselves and the light up to the right height, climb up the chain to the perms, and then go down and g it again.

“My dad did a movie at Universal in 1959 called The Big Fisherman,” says Jim. The cinematographer was Lee Garmes, ASC. “They were shooting 65 m film at a 5.6 because for that size negative, they needed a lot of stop. They were shooting at 1200 footcandles. Now, we normally shoot at about 20. They had double-deck greenbeds, with 75 arcs and 475 10Ks. So, today when hear somebody complaining about how hard it is – you don’t know what hard is!”

“The tools continue to change,” he says. “With the advent of high def and really fast ASAs, the equipment got smaller, but the goal is the same – to help tell the story through the lighting. But I’m not one to order new stuff just because it’s new. I like to wait for it to be proven worthwhile. I try to order just what need, and no extra. There are two reasons: First, it’s more challenging, which makes it fun for me. And second, if you order stuff you don’t need at the beginning, and something surprises you at the end, you’re out of money and you’re in trouble.”

When I spoke with Jim, he was working on Wakefield, a small feature project with Andrei Bowden Schwartz as cinematographer

“I’ve been doing small projects as I find those to be the most interesting,” he says. “On Suffragette, we shot for a fairly longtime, but it was a small project. They had about $15 million but for a period film like that, that’s very little money. On Wakefield, I’ve had the least amount of prep I’ve ever had on a movie. It started out as a $3 million project. We’re up to now about $3.75 million, but that’s still very low budget. But it’s a terrific script and like all the people involved and it’s a new cameraman who, even though he’s young and doesn’t have a lot of experience, he’s a really sharp guy with a great eye and a great attitude. And find that I enjoy those projects much more than doing some Marvel comic book or something with a lot of green screen.”

asked Jim about the importance of a positive mental attitude on the set. “For me, it’s a constant battle to stay even-keeled and not get frustrated,” he says. “But also think I’m pretty good at being optimistic. I worked on a movie once where there were two men in the camera department that had really negative attitudes. On the second day of shooting, they were thinking about how many days we had left. That’s just awful. And this negative attitude is

so catching. It spreads so much faster than a positive attitude. Every day, we have to remember how lucky we are to be doing what we’re doing. We have one of the best jobs in the world and there are so many people that would love to trade places.”