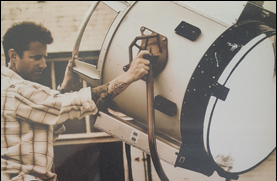 As the son of a best boy, Justin Holdsworth essentially grew up around the business. His dad was a lot best boy at Warner Bros. for 39 years. I asked Justin if he had any anecdotes, and he told me this one: “About eight years ago, I bumped into Lynda Carter on the Universal lot,” he says. told her, ‘You probably don’t remember me, but I sat on your lap when I was a kid, and thought you were the most amazing person ever.” She was flattered, and she actually remembered my dad quite well. She said that he was the only one with enough nerve to ask her to dance at the wrap party!”

Justin’s experience is mainly in commercials, but his resume also includes work on and mark features like The Green Mille, Pearl Harbor, and Seabiscuit, the later of which earned an Oscar nomination for director of photography John Schwartzman, ASC, who moved him up to second unit gaffer. As lighting pro he’s worked on rig-intense productions like Fast & Furious, Cowboys & Aliens and The Bourne Legacy. Most recently, he worked Ride Along, and on a feature remake of CHiPs, the motorcycle cop tale set in southern California. That project wrapped around the end of January 2016. Mitchel Amundsen shot and Dax Shepard wrote, directed, produced and acted in it.

“This was a go-fast, TW-paced project,” says Justin. “There was a lot of stuff on bikes, and we had to be quick. There wasn’t a lot of time for lighting. You got to keep it small and fast and simple. We often used the LED Creamsource on the back of a process trailer or of the camera car. It’s a very simple source, and bright enough to use in day exteriors. I used it to get some light in their eyes when they weren’t wearing their sunglasses, which was quite a bit of the time. The high sun and the helmet visor would throw a hard shadow and was trying to fill that.

“We were kicking butt, with multiple locations every day,” he says. “I think we averaged about 50 setups a day on that movie. Often we would shoot in a CHP headquarters. We weren’t able to run power all over the place, because they didn’t want us making a big mess. I’d bailout and need to plug into the wallpower, and with the Creamsource could do that.”

Mounted on the front of a car with suction cups, the lamp could be powered from battery. At times they had the 105 Freeway blocked off. “We had an electric camera bike, which allowed us to pickup quickly and go,” he says. “The driver could cruise alongside those guys on their bikes during a conversation.” On some cold winter nights in Palmdale, Justin had Condors with 24K tungsten lights with Max Movers and half-blue lighting a big compound. “That way I didn’t have guys

freezing up in the baskets,” he says. “The 24K lamps were a gift because they are just so much brighter than a 20K.”

asked Justin how the changes in technology have affected him. “I’ve been mostly a commercial gaffer,” he says. “It seems to me that unless you’re doing something like Star Wars, the technical end of it doesn’t come into play as much. For projects like these comedies, it’s better to stay simple. It’s like reinventing the wheel. I had some vendors reach out on this show with some really amazing technology, but it just didn’t fit with our approach.

“The simplicity of something like the Creamsource is great because you can get a lot of light out of it,” he says. “You can change the color. It’s very quick and easy and that’s why it was the only technical light I really used. I also used some Kinos, because I could change the color temperature on the fly, no waiting. The bicolor lights are coming in handy and the brighter they get, the better

“The ability to respond on the fly is very important,” he says. “I think my value comes from knowing how to move quickly. We don’t get five weeks of prep. I need to react quickly when things changes and invent as I go.” Digital intermediate technology is one change that has had a significant impact on Justin’s thinking. “On Ride Along, I was working with Kevin Hart, who has a very dark complexion- and who knows what he’s going to do next,” says Justin. “I had to handhold fairly cumbersome lights, and almost overlight him everywhere he went. We went to Light Iron to color time the movie, and had questions in my mind about certain scenes, whether had enough light on Kevin at certain points. But the di colorist made it so easy. She’d freeze the frame, roto him, bring down the background, bring him up – boom, done. It’s almost spoils you because when you know the capabilities, your worries “” much less. So that has been an interesting change.” Justin said he didn’t see much of his dad while growing up. “I think the business has changed,” he says. “We have choices. We can redirect if we want, if we put our minds to it. It takes time to find the connections, but now I can bounce back and forth, and go from a movie right into a commercial, which is great.”