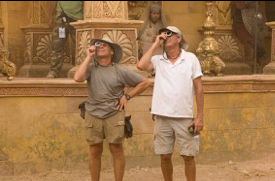 The Gold Room: Moa asked master gaffer Mo Flam about the films that were most formative for him, and One of the titles he came up with was Matewan, shot in 1986 by Haskell Wexler, ASC and directed by John Sayles. Matewan depicts the brutal struggles between coal miners and the thugs hired to stop the union and enforce the will of the mine’s owners. Wexler’s natural-light imagery earned him an Oscar nomination. The film also earned Independent Spirit Awards for best cinematography, best director and best film.

Flam had previously worked with Wexler on Latino, which was shot by Newton Thomas Sigel (later ASC) and directed by Haskell, who passed away in late 2015 at the age of 93. Flam and Sigel had started out together in New York, when Flam was a camera assistant prior to becoming a gaffer

“We had some great people on that adventure,” Flam recalls. “Latino was one of the greatest experiences of my life. Haskel was always an innovator. He was always Curious and what I learned from him is that almost every time you approach a film, you have to look at it like it’s the first film you’ve ever done. You’ve got to look at it with a kind of naive eye to really try and understand what’s important in that project, rather than recycling something you did on another job. Haskell had a unique ability to bring excitement and passion to everything he did.”

The next project was Matewan. “I had been gaffing only a few years at that point, but

Haskell gave me some freedom. He trusted me. One day we were shooting a day exterior, and he said, “Mo, go down and light the train station.” I asked him what he Wanted, and he said, ‘You know, make it sunny in there. You know, make it look good. Those were the instructions. Haskell, who had won two Academy Awards, was telling me – I Wasn’t going to ask him any more questions. I went down and did the best could, and he walked in and said ‘Hey, looks good. Let’s shoot.” He really didn’t change anything. It was an amazing feeling, and it gave me confidence. One of my sayings is that you always have to be able to take no – or yes- for an answer. You have to be flexible, but you really do need your own ideas to start off with.”

Flam’s Credits are consistently projects of the highest quality. A few titles: Cold Mountain, The English Patient and The Talented Mr. Ripley with John Seale, ACS: Black Swan, with Matthew Libatique; I am Legend, with Andrew Lesnie; and All the King’s Men with Pawel Edelman, ASC. Among the other directors of photography he has Worked with are Peter Deming, ASC; Oliver Stapleton, BSC; Don Burgess, ASC; John Toll, ASC; Harris Savides, ASC, Michael Ballhaus, ASC and Stefan Czapsky, ASC

I asked him how he managed to work so consistently on interesting projects, and as you might expect, he humbly called it luck.

“Serendipitously, I was in New York at a really good time and there were a lot of creative, artsy films,” he says. “But it was always important to me to work on things cared about. Now the business is different. There’s not that middle-budget kind of art film. Now most of that stuff is done on television The closest we have now would be like Nancy Meyers, or the foreign films. And those are much lower budget than they used to be.”

But budget doesn’t mean everything. “Just because they have big budgets doesn’t mean they’re good jobs,” he says. “They become like working in a factory. You have a lot of people making decisions and it can be a consensus kind of film. Films are best when there’s a director who is in charge whose opinion is valued. It flows from there. If the script is constantly being rewritten, that is sometimes a sign that a film doesn’t have a strong backbone.”

asked Flam about his more recent credits, including Black Mass and portions of this year’s Best Picture winner, Spotlight, both shot by Masanobu Takayanagi. “As far as I’m concerned, Masa is the next generation’s John Seale,” says Flam. “He’s a total filmmaker, and he’s all about making films and not about drawing attention to himself. He’s not making images that are self-aggrandizing. He’s all about telling stories. It’s just a humble approach, and he’s a quick learner who knows how to get along with everybody

“The nicest people are the best people to collaborate with, because you have a natural relationship,” says Flam. “You put your ego aside. You can be

curious and do your best work. That’s how Haskell was. As long as you weren’t trying to undermine him – if you were supportive, a part of the team and playing for the same goal-that generally worked. That allowed you to be creative, to share and to take chances.”