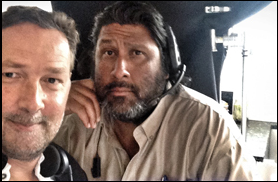 Caught up with Rafael Sanchez in New Orleans, where he is working on Jurassic World with cinematographer John Schwartzman, ASC. That credit will be added to the list of more than 40 feature films on which Rafi has served as gaffer, including more than 20 films with Phedon Papamichael, ASC. A few of the other credits: four Pirates of the Caribbean films, The Lone Ranger, and Tim Burton’s Alice in Wonderland.

Jurassic World is Rafi’s first assignment with Schwartzman. I asked him how he adapts his tools and techniques to a new DP “We’ve know each other for many years, but we’ve never worked together until now,” he says. “We’ve admired each other’s work, so there was a level of respect. That made the friendship and the rapport aspect of it easy. It was a matter of me coming in and finding my place with the dynamic of his existing team, which has been in place forever, They made it incredibly easy for me.

“Ultimately, I think that John and have similar aesthetics and similar tastes, and so it quickly becomes almost second nature,” says Rafi. “We both see the same thing. mediately have what I think I would do, and then I realize that it’s exactly what he would have done anyway. If that wasn’t the case, it might take a bit longer. But in this

Prior to the New Orleans segment of the job, the crew worked in Hawaii for a couple of months on big practical locations and jungle scenes. Rafi made extensive use of ARRIMAX, M90 and M40 units to penetrate the foliage with long throws. Gunner Lighting LEDs, powered by Litegear, were employed for closer work.

“Obviously there’s a lot of rain in Hawaii, and in New Orleans as well, so we were very concerned about making sure that the equipment would be covered and wouldn’t fail on us,” he says. “Because when you’re that far away from home, if things fail, you’re in trouble. There’s a big film community in both places, but they’re still a long way from LA, the hub where most of the equipment comes from

“I spoke to some of the people at ARRI, and they recommended that we not cover the heads at all,” he says. “They told me that those units are designed to be rain resistant was a little hesitant at first, but boy, was pleasantly surprised. At times, we had as many as 12 ARRIMAX units up on MaxMovers and Condors around this jungle area. We put rain hats on the MaxMovers themselves, and the ballasts and the electronics, but We didn’t protect the heads from the elements at al. We got some serious rain, and we didn’t even turn them off. They performed amazingly well, and that held true for all their lights, all the way down the line. We didn’t have a single problem with the Weather it sure saved us a lot of headaches”

The budget on Jurassic World is reportedly S150,000,000. I asked Rafi about how he handles the pressure that comes with such a huge undertaking “The key for me is hiring great people,” he says. “I don’t feel like I’m in it alone. I surround myself with proactive people who are incredibly talented and bring a lot to the table. They don’t really work for me, they work with me. I have this team of professionals who have so much experience and talent. trust them. It’s going to get done – it always does. And it always exceeds what ask for. There’s always a little something extra, something I didn’t think of, something we didn’t see on the scout that is covered anyway. So you draw from the people that surround you, and that creates an environment where failure is less likely.”

Once Rafi and his team are on the set, working on a specific series of shots, they’re always thinking five or six shots ahead. “That way, when we finally

get to that place, it’s just a matter of turning it on, as opposed to reacting,” he says. “You do as much as you can to alleviate the opportunities for pressure to get to you. If you don’t let it creepin, then you don’t have to worry about it.”

Films that Rafi worked on have been nominated for and won many Oscars, but Nebraska was the first film he gaffed that was nominated for a Best Cinematography Academy Award. That nod was one of six for the film “It was nice,” he admits. “At some level, you appreciate the recognition of your peers, hearing them say ‘Good job. We all work hard and try to make the best film we can, and it’s nice to get your part recognized. Nebraska was special. Obviously, Alexander is a great collaborator to work with. We’re looking forward to the next opportunity.”